At the start of the month I realized that June 30th marks the halfway point of 2018 and that I’d made absolutely no progress on one personal goal and two work goals I’d set for the year. And that made me wonder if I’d even have time for fun because it looked like this would be a nose to the grindstone month for me!

Fortunately, I chose to invest half a day in a RESET (reflect, evaluate, simplify, establish a plan, time block) exercise. That led me to drop a goal and set things up to make progress on the other two goals. The most effective thing I did was put recurring blocks of time in my calendar to work on the goals where I’d fallen behind – a couple of hours each day with no meetings, no telephone calls, no social media, no internet rabbit holes, basically no interruptions. I not only made significant headway on the two goals where I’d fallen behind – I had time leftover for fun!

Earlier posts cover some of those fun things in detail: a long walk with a friend at the Ann & Sandy Cross Conservation Area; a rainy afternoon at Esker and a bike ride up Highwood Pass.

Here are photos from 5 more enjoyable aspects of June:

Mr. GeoK and I try to ride together a couple of times a week during our cycling season. Our number of rides (5) and total riding distance (276 km/171 miles) were down compared to May, partly because of work and partly because of weather. One of my favourite riding destinations in the city is Ralph Klein Park, which has a beautiful education building, extensive wetlands and a public art installation called Hawk Hill Calgary Sentinels. This visit is the first time the path was open so that we could go walk around the sentinels. Mr. GeoK kind of blends into the building, but including him in my shot provides a bit of a sense of scale. 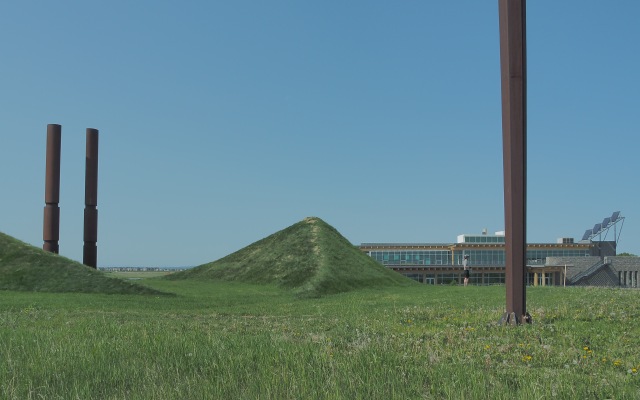 We’re not serious birders, but late May/early June is one of the best times to head out to see migrating songbirds and nesting water birds. While riding Calgary’s pathways, we’ve seen how this year’s crop of goslings matured from fuzzy yellow puff balls to almost full grown-sized, grey puff balls over the past month. We’ve seen a few hawks, some giant white pelicans, plenty of gulls and some herons. The highlight for me was spotting two pairs of mountain bluebirds – one at the Ann & Sandy Cross Conservation Area and one in Canmore (no photos). Mr. GeoK was photographing a hawk in this one. 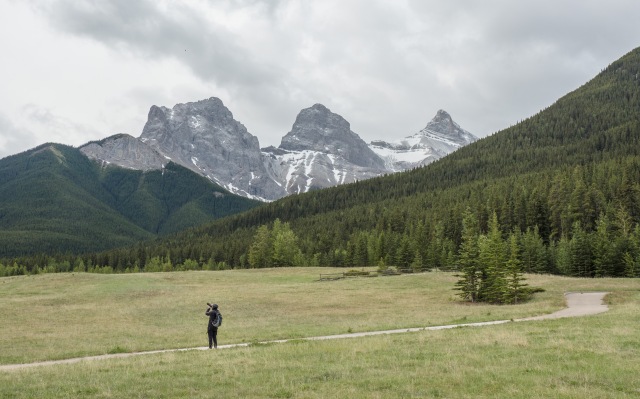 May through June is also the best time to search for wildflowers in this part of the world. Some of my best finds in June included early coral root orchids, Calypso orchids, wild roses, yellow mountain avens, wild strawberries and heart-leaved arnicas. I was really surprised one day to spot a single stem of shooting stars in a meadow; usually we see them at higher elevations.

In early June, Beakerhead invited community partners, sponsors and media to an overview of the program of attractions and events for 2018. As a member of the Beakerhead photo crew, I showed up with my camera to capture the action. I was immediately conscripted to join the atomic parade, which involved wearing a white Tyvek suit and running around my assigned neutron and proton, which made the photography more challenging than usual!

5. Working on our Virtual Geocache

Last August, Groundspeak handed out 4000 virtual geocache awards to cache hiders around the world and we got one of them! Since then, we’ve considered and discarded several ideas. With the August deadline for submission rapidly approaching, we were starting to feel the pressure. But we finally came up with an idea we’re both excited about and spent several hours this month considering possible locations. We’ve submitted our cache for review and have received confirmation that it will be published in July). This bronze cast statue of Spanish artist Juame Plensa (often referred to as the tree hugger) is one of the locations we considered but ultimately did not use for our virtual cache.

That’s it from me! What did you do for fun this month?

To see what other participants got up to in June, head over to a ‘lil Hoohaa and follow the links. While you’re there, please consider joining us! It’s a low-stress photo assignment. For each month’s theme, you’re asked to share five photos; the amount of accompanying text is up to you. The next theme will be posted at a ‘lil Hoohaa in early July.