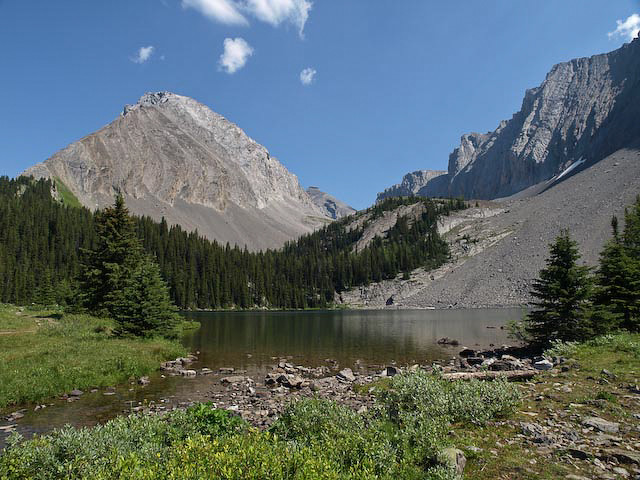 We hoped to get over to Chester Lake last Sunday, but an unexpected blizzard forced us to turn back and retrace our steps through the Headwall Lakes valley. Today we decided to hike a little beyond Chester Lake in order to do some cache maintenance prompted by a recent log on our Fav. Hike #3 – Beyond Chester geocache.

The weather forecast was calling for sun, with temperatures expected to climb to near 30, so we left the house by 7:30 and arrived at the Chester Lake parking area a couple minutes after 9 o’clock. After a quick stop at the outhouses (were they ever in bad shape today), we started the gentle climb to Chester Lake.

We took a slightly shorter alternate trail part of the way, arriving at the lake by 10:30. There were lots of fish jumping – guess they were looking for some breakfast. The sun was just coming up over the mountains as we approached the lake, so we tried some "art" shots; unfortunately they didn’t turn out as we’d hoped. 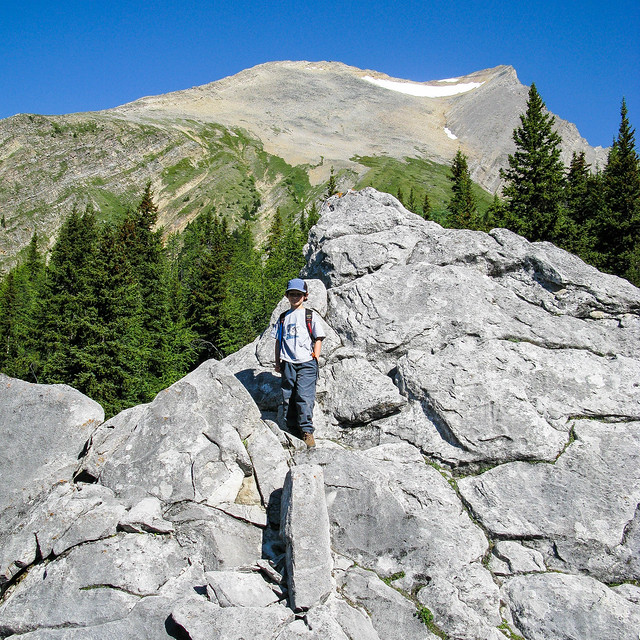 As expected, we reached the Elephant Rocks about 500 meters after turning up the hill from the lake shore. We stopped briefly to check on our Elephant Rocks micro cache and then the boys enjoyed a bit of climbing on the big boulders. This is a great place to bring kids around ages 6+, as they have a great time playing in the boulder field.

By 11:30 we had replaced the camo bag on our other cache and settled down to enjoy an early lunch on the rock slabs overlooking the first lake in Three Lake Valley. The water level in the lake seems quite low compared to last August. With the temperature rapidly climbing we decided to turn back rather than make the next climb to the upper valley to check on the other two lakes. There were still plenty of fossils to discover near the first lake and Mr. GeoK took lots of photos.

Back at the car at 1 o’clock, we checked the thermometer which was reading 30 degrees. But since this hike was only 11.9 km return and we finished it relatively early, we all got back to the parking area with plenty of water left in our camelbacks. With a total elevation gain of just 400 meters and no scree to contend with, this is a great option for fairly inexperienced hikers. Although we have hiked up in October when there were a few cm of snow on the ground, we haven’t yet tried this route on snowshoes. But we know that it can be done, as a couple of geocachers have managed to find our caches mid-winter.