The CBC’s Canada Reads: Turf Wars kicked off last October, with book lovers and CBC listeners recommending titles for the 2013 round of Canada Reads. After several weeks, the most popular 10 titles in each of five Canadian regions were published. After a round of online voting, the CBC announced the top 5 titles for each region (British Columbia and Yukon, Prairies and North, Ontario, Quebec and the Atlantic Provinces) at the end of November.

From there, it was up to each of the 2013 panelists to choose one of the top 5 books from their region to defend in the final phase of Turf Wars – the live debates taking place from February 11-14. If I remember correctly from past years, on Monday, February 11th, each panelist will advocate for his or her selection. One book will be eliminated each day, with the remaining books moving forward to the next round of the debate. The final round will be broadcast live on Thursday, February 14th.

I’m a little late to the whole Canada Reads 2013 thing. I heard bits and pieces on the radio in the fall and into the New Year. Then I fired up Twitter one day in early January and saw that @cbcbooks was looking for a few more followers to read and review the 5 contenders. I haven’t published many book reviews, but I read a lot (and relatively quickly) so I thought “why not?” A few days later, Canada Post delivered a big brown envelope from the CBC and I was faced with a difficult decision. Which book should I read first? 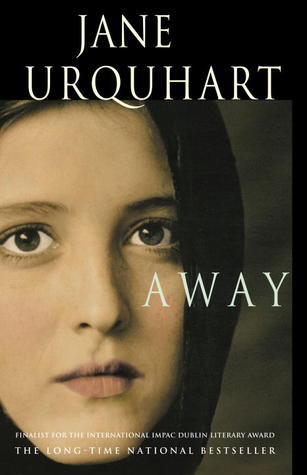 I started with Away by Jane Urquhart for the simple reason that it comes first alphabetically. I’ve since learned that award-winning author and historian Charlotte Gray will be championing Jane Urquhart’s novel, the Canada Reads 2013 contender from Ontario.

FROM THE BACK COVER:
“A stunning, evocative novel set in Ireland and Canada, Away traces a family’s complex and layered past. The narrative unfolds with shimmering clarity, and takes us from the harsh northern Irish coast in the 1840s to the quarantine stations at Grosse Isle and the barely hospitable land of the Canadian Shield; from the flourishing town of Port Hope to the flooded streets of Montreal; from Ottawa at the time of Confederation to a large-windowed house at the edge of a Great Lake during the present day. Graceful and moving, Away unites the personal and the political as it explores the most private, often darkest corners of our emotions where the things that root us to ourselves endure. Powerful, intricate, lyrical, Away is an unforgettable novel.”

MY THOUGHTS:
As I finished this (mostly) captivating depiction of the lives of Mary, Eileen and Esther, I realized that the preface is a capsule description of the novel’s structure and characters’ experiences:

Part I, which centers on Mary when she’s living in Ireland, adeptly incorporates the trace of a fish on a pool. In fact, it’s what causes Mary to go away in the first place. The trace of a bird on a branch can be seen throughout Part II, which is set in Ontario and centres on Mary’s children – Liam and Eileen. In Part III, after Liam and Eileen move to the shore of the Great Lake, the trace of a man on a woman is portrayed primarily through Eileen’s relationship with political activist Aidan.

I appreciated and enjoyed several aspects of this novel:

Here are two of my favourite passages, from the first couple of pages…

Describing the women of the family – “They inhabited northern latitudes near icy waters. They were plagued by revenants. Men, landscapes, states of mind went away and came back again. Over the years, over the decades. There was always water involved, exaggerated youth or exaggerated age. Afterwards there was absence. That is the way it was for the women of this family. It was part of their destiny.”

Setting the stage for the narrative – “Esther O’Malley Robertson is the last and the most subdued of the extreme women. She was told a story at twelve that calmed her down and put her in her place. Now, as an old woman, she wants to tell this story to herself and the Great Lake, there being no one to listen….She paints a landscape in her mind, a landscape she has never seen.”

I also loved the scene depicting the arrival of Osbert Sedgewick (Mary’s landlord in Ireland) at Liam and Eileen’s homestead.

For me, the biggest weakness of Away is how the story fizzles out, kind of like the draw of away fades over the generations of women. More specifically, I found Mary’s story most compelling; when I finished the novel I was left with so many unanswered questions about the seven years when she last went away. I found Parts II and III far less compelling. Perhaps it’s deliberate. Maybe Urquhart structured the novel to mirror the weakening pull of away. Whatever the reason, the bottom line is that for me, Part III dragged. At the same time, I suspect that readers with a stronger interest in Irish politics may find Part III to be the most interesting.

Some final (and somewhat random) observations. I can’t say enough good things about the prose – Urquhart’s early success as a poet is evident throughout. It seems to me that Away has influenced other novels. For example, I found Part II had some broad similarities to Bride of New France by Suzanne Derochers, which I read about a year ago – mostly relative to the challenges faced by pioneers settling in Canada’s vast wilderness and in terms setting. Finally, I always appreciate fiction that prompts me to open my dictionary, in this case to check the meaning of revenant and to help puzzle out the possible meaning of the name of Liam’s farm, Loughbreeze.

RATING: 4 out of 5 stars, with the loss of one star due to the fact that I didn’t particularly enjoy Eileen’s part of the story and found it very slow going.

RECOMMENDED: For those who enjoy lyrical prose, have an interest in the experiences of Irish pioneer settlers in Canada or stories of families across generations.

One thought on “Book Review: Away by Jane Urquhart”