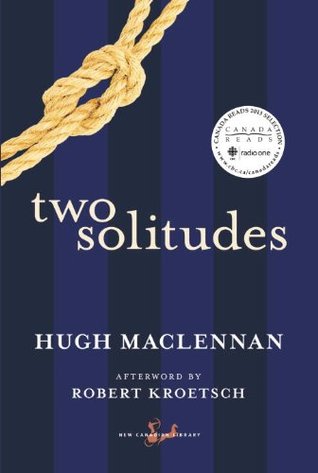 Continuing my quest to read and review all five contenders for Canada Reads 2013 before the live debates commence, I opened Two Solitudes by Hugh MacLennan. I recently learned that the initial printing of 4500 copies sold out within hours of its release in 1945 and that the novel received the Governor General’s Award for English-language fiction that the same year. I also learned that “those who know” consider this a classic work in terms of Canadian identity.

Two Solitudes will be championed by Canadian actor/writer/producer Jay Baruchel, who selected the novel from the list of five finalists from Québec.

FROM THE BACK COVER:
“Through the tensions and misunderstandings that gave birth to modern Québec, Two Solitudes follows the Tallard family: Athanase, a pillar in his French-Canadian community; Kathleen, his beautiful Irish [second] wife and their son, Paul, who hopes to reconcile his two different identities. Both generations face an escalating struggle over their future, and each tries to find a balance in themselves and the country they call home.”

MY THOUGHTS:
I hadn’t previously read anything written by Hugh MacLennan, so aside from the fact that it’s one of the Canada Reads 2013 finalists, the only thing I knew for sure before opening Two Solitudes is that Mr. GeoK had to read it in high school and didn’t like it. I get that…the combination lecture / slow-paced story over 500+ pages would probably seem like a lot of time and effort just to learn enough about Canadian identity and nationalism to pass the final exam.

But I’ve been out of high school for many years now, have an affinity for anything that supports my quest to keep learning, and I favour sweeping, multi-generational family sagas. So the richly detailed description of the setting for Two Solitudes captured my attention from the start, while the family dynamics, business and political machinations, and rich characters held it to the very end. I enjoyed the deft mix of historical fact and fiction (a style some have labelled didactic). The various members of the Tallard family provided ample material for MacLennan to convey a complicated mix of family relationships – father/son, step-mother/step-son, brother/brother being the most interesting to me.

While reading Two Solitudes I realized I don’t know a lot about Canadian history between the end of World War I and the start of World War II. A few scraps of information about the dust bowl, the Great Depression and the conscription crisis are all I retain from my school days. Perhaps that’s why Two Solitudes’ blend of education and entertainment so appealed to me. For me, Two Solitudes was a rich and engaging portrayal of this period and I finished the book feeling I have a better sense of what it was like live in Canada (especially Québec) during that time. I was caught up by the many faces of two solitudes – rural/urban, French/English, Catholic/Protestant, male/female (especially Paul/Heather), backroom power brokers/frontline farmers, the successful/the not successful, and more.

I also appreciated the occasional diversions from the main story line. For example, I found the sections detailing Huntly McQueen’s thought processes, business practices, and priorities provided quiet insight into the tight-knit “old boys” network that basically ran Canada back then (and arguably does, to a lesser degree, today). Over the course of the novel, I grew to admire Captain Yardley’s character; I appreciated how he continued to move the story along even after his part came to a close.

I realize it’s the way life was back then, but I really disliked some of the female characters. Janet’s manipulative, “woe is me – I’ll call Huntly” tactics really irked me, and I was even more irritated when Helen allowed herself to be manipulated. Daphne was not a sympathetic character. And while I generally admired Kathleen’s strength, I found some of her actions unappealing, too.

Finally, I found the afterword written by Robert Kroetsch quite helpful. Kroetsch describes several broad themes in Two Solitudes: the idea of novels and libraries as a means of memory; the importance of family; and how the period between the two World Wars saw the beginning social change (non-traditional families, move from village to city, etc.). If I ever read Two Solitudes again, I hope I’ll remember to treat the afterword as a foreword.

RATING: 4.5 out of 5 stars, with the loss of half a star solely due to my strong dislike of some of the female characters (Janet and Daphne) and my complete inability to “get” Marius, who I found intractably irrational.

RECOMMENDED: Anyone with an interest in Canadian history / Canadian identity or who enjoys family saga fiction (along the lines of John Rutherford).

RANKING: At this point, having read 2 of the 5 entries for Canada Reads 2013, I think Two Solitudes should come out ahead of Away. But I am resigned to the fact that it’s more likely to go the other way, since many readers will find the “lecture” aspect and 500+ page length of Two Solitudes off-putting.