It’s hard to accept that it was July 22 before we finally made it out for our first hike of the 2010 season. It’s easy to make excuses: bad back, lousy weather, other commitments, holidays. But the reality is that when we took that first breath of clean mountain air, we realized how much we truly missed being in the Canadian Rockies.

We were a little uneasy as we drove south along Highway 40, through the provinical parks that are collectively referred to as Kananaskis Country. The valley was heavily clouded over and as we approached Peter Lougheed Provincial Park it started to rain. After a brief discussion, we decided to carry on to the trailhead; everyone in the family was properly equipped with Gortex-lined hiking boots and full rain gear.

It was still drizzling when we stopped in the meadow; several pikas came out to greet us as we dug our rain jackets out of our packs and set our trekking poles to the proper lengths. One nice thing about Arethusa Cirque is that you’re never more than 45 minutes from parking, so we decided to hike up to the meadow and reassess at that point.

We stopped twice along the trail to check on a couple of our geocaches, which overwintered very well. When we reached the meadow, it was raining fairly steadily, but not hard enough that we felt compelled to don rainpants, so we carried on. The creek through the meadow and along the edge of the talus field was running higher than we’ve ever seen it, so we had to scramble a little bit more than usual.

Youngest GeoK surveys the creek running through the meadow

Youngest GeoK leaps from one rock to the next. Be careful! Those rocks are slippery! 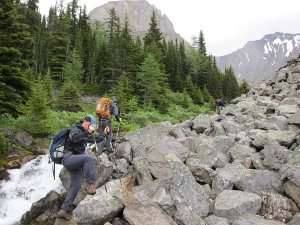 Youngest GeoK takes the direct route to the overlook

By the time we reached the waterfall, the rain had pretty much stopped and a few bits of blue sky were starting to show, so we carried on up the valley to the overlook where we hid our very first geocache, GCXATF Fav. Hike #1 – Arethusa Cirque. Once we checked on the cache container, it was still only 11 o’clock – a little early for lunch. At this point, we had a decision to make – retrace our path to the parking area or continue along the north edge of the cirque and complete a loop. Since the rocks in the talus field were pretty slippery from the rain, we decided to hike the loop, stopping several times to take photos and at about 11:45 for a short lunch break.

Well along the loop, Oldest GeoKid stopped to photograph the view looking back up the valley 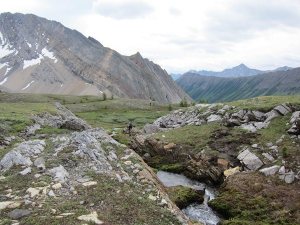 Although we’ve done this hike at least a half-dozen times, we’ve never seen a creek flowing
from the side valley abutting Ptarmigan Cirque. Highwood Ridge is showing from center right
to the center of the photo.

Our trek down to the valley floor was uneventful. Unfortunately, we didn’t spot any Bighorn Sheep or moose today. In fact we didn’t even hear any sounds of the moose that usually lives in the wooded area just north of the meadow. We did encounter three hikers who were headed up as we headed down. They were hoping to climb to the top of Mount Arethusa and look over into Ptarmigan Cirque. After comparing notes and sharing our previous experience with that route, we wished them luck and continued on to our usual spot for crossing the creek. 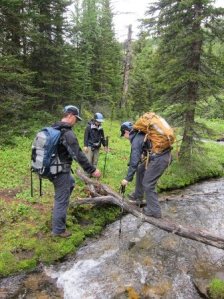 Mr. GeoK, Youngest GeoK and Oldest GeoKid are safely across

It was just after noon when we reached the trailhead parking area, and our track showed the usual 5 km distance for travellling the loop. Although the sun never did shine brightly, we really enjoyed the fresh air and liquid sunshine and resolved to get back to the mountains again next week.