The third round of Calgary Science School student site visits for the beaver re-introduction study at the Ann and Sandy Cross Conservation Area started Tuesday morning, when 45 grade 8 students arrived via school bus. Set in the rolling foothills south of Calgary and east of the Canadian Rockies, it’s a beautiful site. As we walked up the hill and viewed Goodwin Pond for the first time this year, I noticed two big changes since our visit last September. First, there’s a small building just off pond side of the old farm road. It’s a wildlife viewing “blind” with several hinged panels that can be opened so that visitors can sit quietly inside hoping for a glimpse of the beavers (or other wildlife). Second, on the far side of the pond there are a couple of small aggregations of logs that looked to me like stage 1 of the beavers’ den. 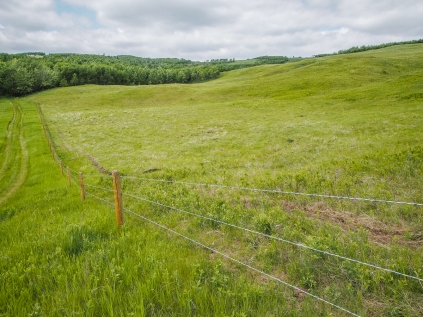 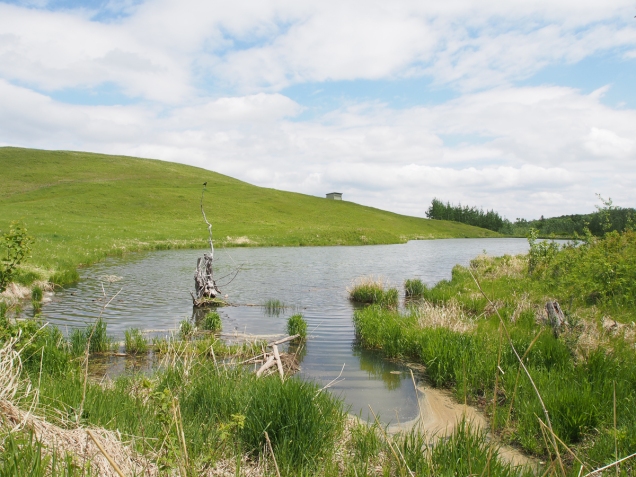 Consistent with their second site visit in September 2012, the students used various probes to assess different aspects of water quality at the pond. Their second main activity was to study six samples dipped from the pond and compile a list of the types/numbers of invertebrates living in the pond. A small subset of students also took a third set of photos for each of the 5 fixed “photo points” that will be monitored over the course of the 3-year study. Before the end of the week, other grade 8 and grade 7 students will sample water quality and identify invertebrates living downstream of the pond and will assess the current vegetation mix, both at the pond and downstream of the pond.

My own informal observations noted several pairs of barn swallows, a few red-winged blackbirds, a garter snake (specific type yet to be identified – please leave a comment if you know what it is), and lots of freshwater snails. I also spotted the remains of several trees the beavers harvested for food or shelter.

Here’s a view of the outlet end of the pond in comparison to one taken a year ago. The current year photo shoes the two aggregations of logs on the far shoreline. If you look carefully, you’ll also notice that this year’s photo (on the right) shows that the beavers harvested quite a few of the smaller trees growing closest to the shoreline. 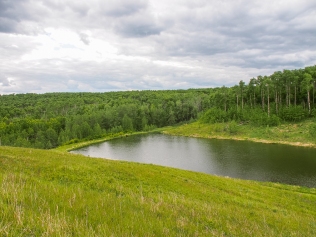 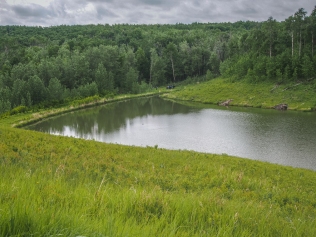 June 2013
My primary responsibilities as a parent volunteer were to set-up the school’s GPS receivers on Monday (all set to the same map datum and properly loaded with the coordinates for the 5 fixed photo points) and then on Tuesday, to ensure some basic quality control in terms of the photos taken at the photo points. Since teachers, staff from the Miistakis Institute and Cross Conservation and other parent volunteers worked with the students on their other two activities, I also had time to take my own photos at all the photo points and to experiment with some of the “art” settings on my new camera. Here are a couple of my favourite “key line” filtered photographs: 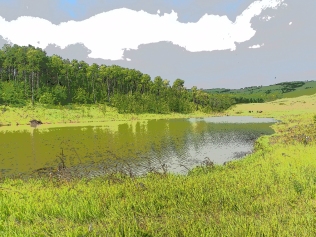 I’ll be putting my name in for the next round of site visits in the fall, even if that means going with a group of students that doesn’t include my own budding scientist! So watch for a report on Site Visit #4 sometime in late September / early October. One thing I would really like to find out then is whether any data analysis has been done and whether there are any preliminary findings that can be shared with the students. I think they’d get a really strong sense of the value of the time and energy they’ve spent along Pine Creek if they see the data they’ve collected put to good use. In the meantime, I know they all got a big dose of Vitamin N this week, something we all need on a regular basis and something the Calgary Science School dispenses pretty much daily!