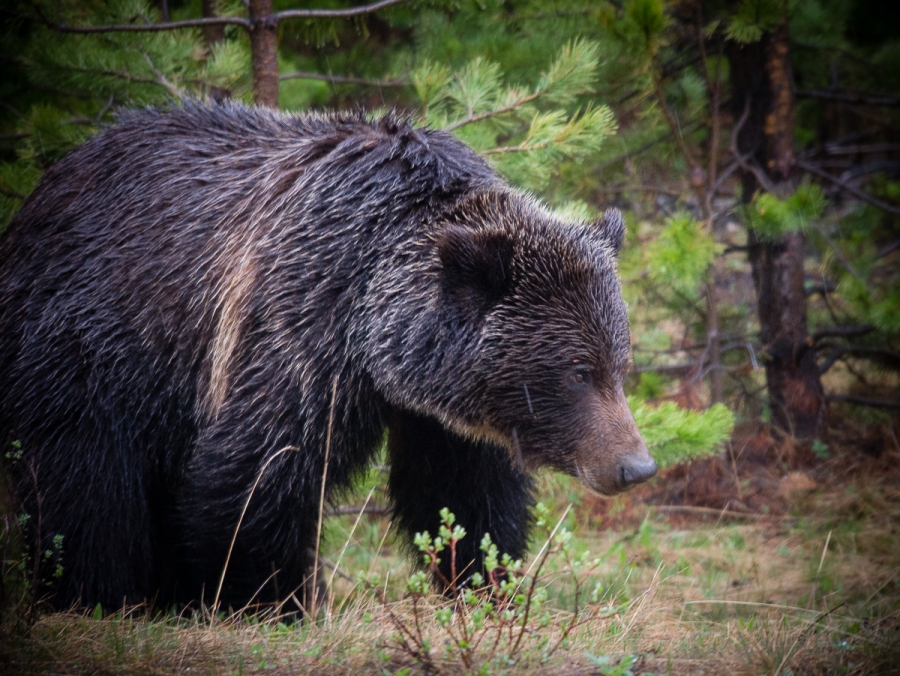 Of course the weather didn’t cooperate! The rain started falling at 4:18 am and before 6 o’clock the percussive impact of fat raindrops on the fly over my tent prompted me to dress, pack and exit my shelter. I discovered a few other parents were up, too. Over mugs of hot coffee, we decided to divide into two groups. The smaller group did an amazing job of preparing breakfast (hot oatmeal topped with Craisins and sprinkled with cinnamon and brown sugar, accompanied by fresh fruit and muffins) and setting up all the ingredients for another round of “pack it yourself” lunches. Because of the rain, they did all of the cooking, set-up, serving and clean-up within the confines of the picnic shelter. The students really appreciated that there was a fire going in one of the wood stoves.

Meanwhile, the rest of us pondered how best to take down 20 tents and stow them away in the pouring rain. Our objective was to keep the tents as dry as possible, since 50 more grade 8 students and their teachers, along with another parent support team, would be arriving in Jasper in four days and would be setting up and sleeping in the same tents for the next three nights. In the end, we left the flys standing and took the tents down underneath, stowing the tents, poles & pegs in the tent sacs and stuffing all the wet flys into garbage bags. We left 3 flys up so the students could stow all their duffels, sleeping bags and other assorted stuff out of the rain until the bus arrived.

After walking a line abreast across the campsite to pick-up any stray bits of litter, the students boarded the bus about 9:30. I persuaded K to ride with me, to help me stay awake during the long drive back to Canmore. It took a bit of talking; he’s at the age where he really enjoys spending time with his friends. But in hindsight, when he learned the next school day that the heating system didn’t work on the charter bus, he was glad he opted to be my co-pilot.

K and I stopped several times along the Icefields Parkway to collect the answers to questions for three different earthcaches: Athabasca Falls, a weeping wall and Mistaya Canyon. We drove through rain mixed with snow the entire way and the highway was very slippery near Bow Summit. 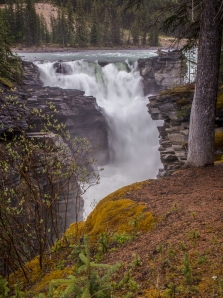 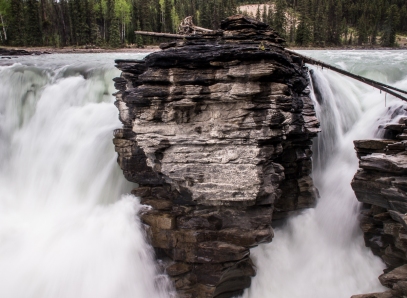 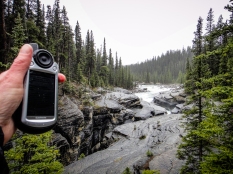 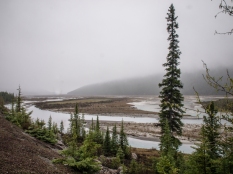 Just short of Lake Louise we turned off onto the Bow Valley Parkway. We planned to meet up with the rest of the students (riding on the charter bus) at the Castle Mountain WW I internment camp. Just after turning onto Highway 1A we stopped briefly to enjoy the sight of yet another grizzly bear – this one was on the shoulder of the road and crossed in front of us after we’d stopped. I certainly appreciate the 60 kph speed limit, because even travelling that slowly, the bear was difficult to spot. We also spotted a bull elk, regrowing its antlers and shedding its winter fur. 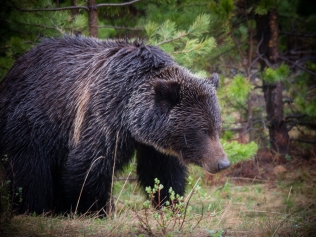 When we reached the small pull-out parking area for Camp Castle, we were the only vehicle there. I wasn’t entirely surprised, figuring that because we’d stopped a few times along the way, the bus must have already been and gone. (We later learned that because there was no heat on the bus, they decided to carry straight on through to Calgary.) Despite the falling snow, K and I spent a somber 10 minutes reading all the information signs and memorial plaques before continuing south.

Our final stop along the Bow Valley Parkway turned out to be another trip back in time. I wanted to find one last geocache, which turned out to be hidden near an old car. I couldn’t help but wonder how it ended up in the woods like it is and was reminded of the surprising things that can come into your when you play the game of geocaching! 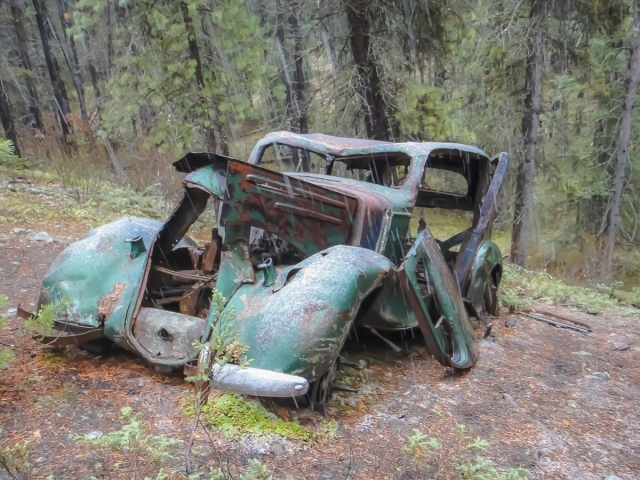 This trip reinforced how much our family values the Calgary Science School’s emphasis on outdoor education – whether it’s taking a phys ed class outside, going to the Weaselhead for a half-day of wetland studies, or organizing a multi-day camping trip. It’s all great!