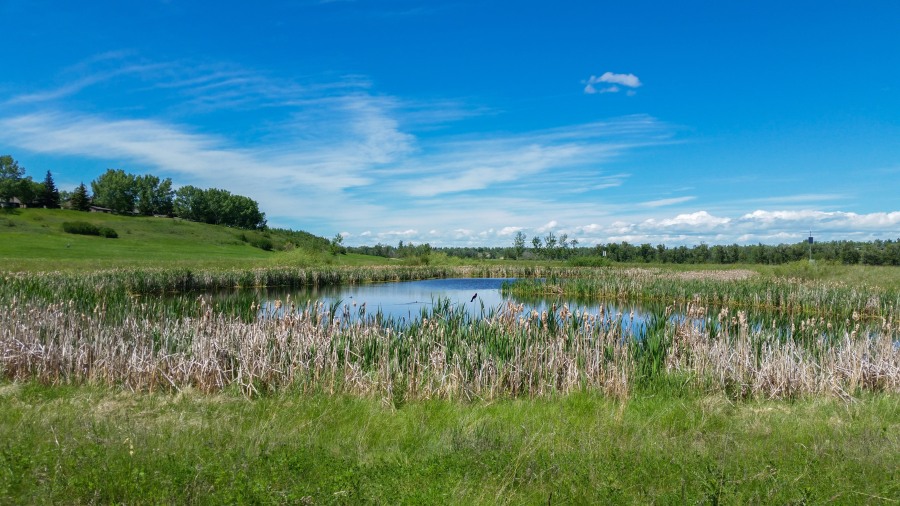 I did a little scouting of potential bike routes before we headed into the southeast quadrant of Calgary to drop K off at a friend’s house. Mr. GeoK went along with my plan, so we drove the short distance from the Queensland neighborhood to the Mallard Point Day Use area in Fish Creek Park where we unloaded our bikes under the shade of a giant poplar tree.

For those not familiar with Fish Creek Park, it’s the largest urban park in Canada. When the province purchased the land in 1973, Fish Creek was pretty much at the south end of Calgary city limits. Since then, the city has expanded in all directions and Fish Creek Provincial Park is surrounded by suburbs, except to the west, where it borders the Tsuu T’ina Nation. The park is named for its central feature, which flows 19 km (12 mi) through the park before joining the Bow River. An extensive pathway system in the park attracts residents from adjacent neighborhoods and visitors from all over the city and beyond. The Fish Creek / Highway 22X boat launch is a popular put in point for those looking to spend the day fly fishing a stretch of the Bow River. There are numerous points of geological interest including a large outcrop of the Porcupine Hills Formation and evidence of the Mount Mazama volcanic eruption that occurred almost 8000 years ago. Fish Creek Park appeals to naturalists, including birders. A mountain bike skills park is under development. And Sikome Lake is a popular summer, family friendly destination; a man-made lake, it’s basically a huge outdoor swimming pool with a sandy bottom and beach. Beginning in 2016, Alberta Parks is charging user fees for Sikome Lake. General access to Fish Creek Park is free. For a current listing of upcoming events (many of them free), see the Alberta Parks information page.

When our boys were younger, we often headed to Fish Creek Park to meet up and go for a family bike ride with Grandma and Grandpa GeoK. And while Grandpa GeoK still rides in the park almost every day of the year, now that our boys are pretty much grown up we tend to ride from home rather than load up the bikes to ride elsewhere in the city.

We started by pedaling north from Mallard Point Day Use area and then east across the Bow River via the Sue Higgins pedestrian bridge. This allowed for a short detour into suburbia to drop off a new bike light for Mr. GeoKs’ dad (who rides pretty much every day). From there, we headed south on the Bow River Pathway as it meanders along the western edge of Douglasdale and then gained some elevation to ride along the top of the bluff that forms the western edge of McKenzie Lake. We stopped a couple of times to enjoy the view and another time to find a brass cap location for our favourite virtual geocache – GC43F3 Alberta Brass Cap Cache. 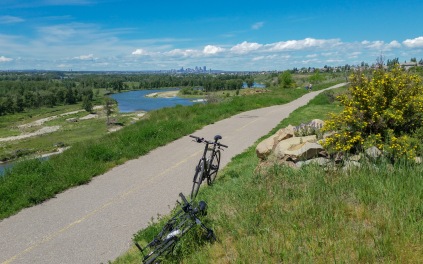 Where McKenzie Lake transitions to Mountain Park, we headed down a series of steep switchbacks to cross another bike/pedestrian bridge over the Bow River and begin riding in Fish Creek Park, where an extensive section of the pathway has been incorporated into the Rotary/Mattamy Greenway (a 138 pathway that will connect 55 communities across all 4 quadrants of the city once it’s completed).

There were lots of gulls dipping into the Bow River just after we crossed the bridge. 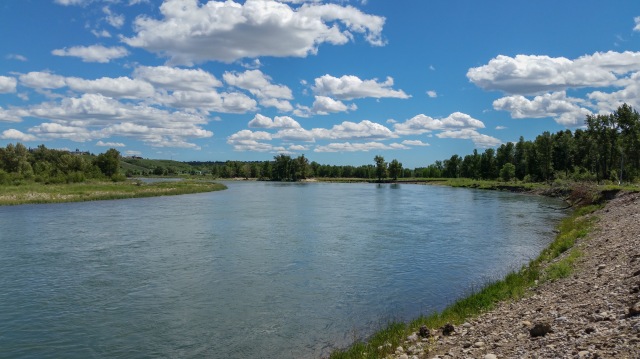 The pathway was pretty busy near the Ranche Restaurant and Annie’s ice cream shop, but not too bad for a summery Sunday afternoon as we pedaled to our turnaround point just west of Macleod Trail. For me, the highlights through this long stretch in the creek valley were the storm water wetlands, where red-winged blackbirds and other song birds were tweeting and chirping. 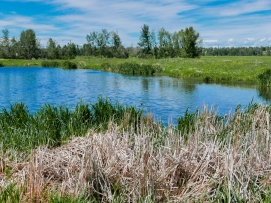 Gently curving pathways, rounded slopes of grass-covered hills and puffy clouds floating across the blue sky were pretty impressive, too. 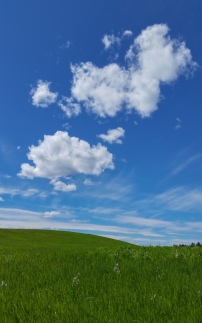 The final highlight was spotting a male, ring-necked pheasant near the Bankside Day Use Area in Fish Creek Park (no good photos).

Have you visited Fish Creek Provincial Park recently? What’s your favourite park feature? Is there a stretch of pathway that you rate as “must ride”?

SUMMARY:
Total distance = 31 km
Total time = 2 hrs 15, including 30 minutes for stops
Total gain = 130 meters gain, some for the climb up to the top of the bluff, but mostly from the slow and steady elevation gain riding west in Fish Creek Park