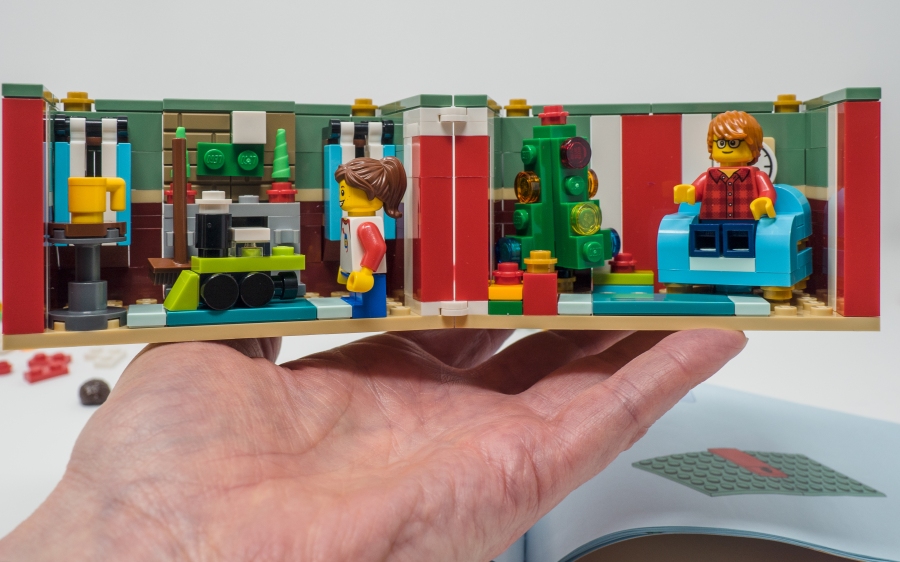 Thanks to different availability dates, at least two purchases were required to score the three most coveted gift with purchase sets from Lego’s shop at home store in the run up to the 2018 holiday season: 40289 Diagon Alley, 40292 Christmas Gift and 40293 Christmas Carousel.

K built the Diagon Alley micro build within hours of its arrival (any interest in a write-up of this set?). I waited until December to open the Christmas Gift.

The 301 pieces range in size from single stud, 1/3 height pieces to 1/3 height plates. The full height bricks were all just one stud wide, so all but the two largest plates fit into three poly bags.

From start to finish, the Christmas Gift took about 30 minutes to build (including pauses for photographs). As with most sets that include minifigs, the first few steps brought a Lego adult and a child into being. Unusual for a small set like this, Lego included an alternate hair piece. I opted to use the alternate hair piece for the adult, because it’s long enough to be gender neutral. My life experience interprets the hair assigned to the child by the instruction booklet as female and the dark brown, shorter hair piece as male. I wonder if Lego’s intention was to provide builders of this set with some latitude around the minifig identities or if I’m reading too much into the inclusion of the extra hair piece.

The next five steps cover the build of a remarkably detailed, mini locomotive, similar to the one in the 2014 Lego Holiday Bonus Lego Toy Workshop.

The main build consisted of three sections: the two halves of the gift box and the lid.

One half of the gift box features a vignette with detailed and decorated fireplace flanked by windows hidden behind (fairly clunky) drapes. 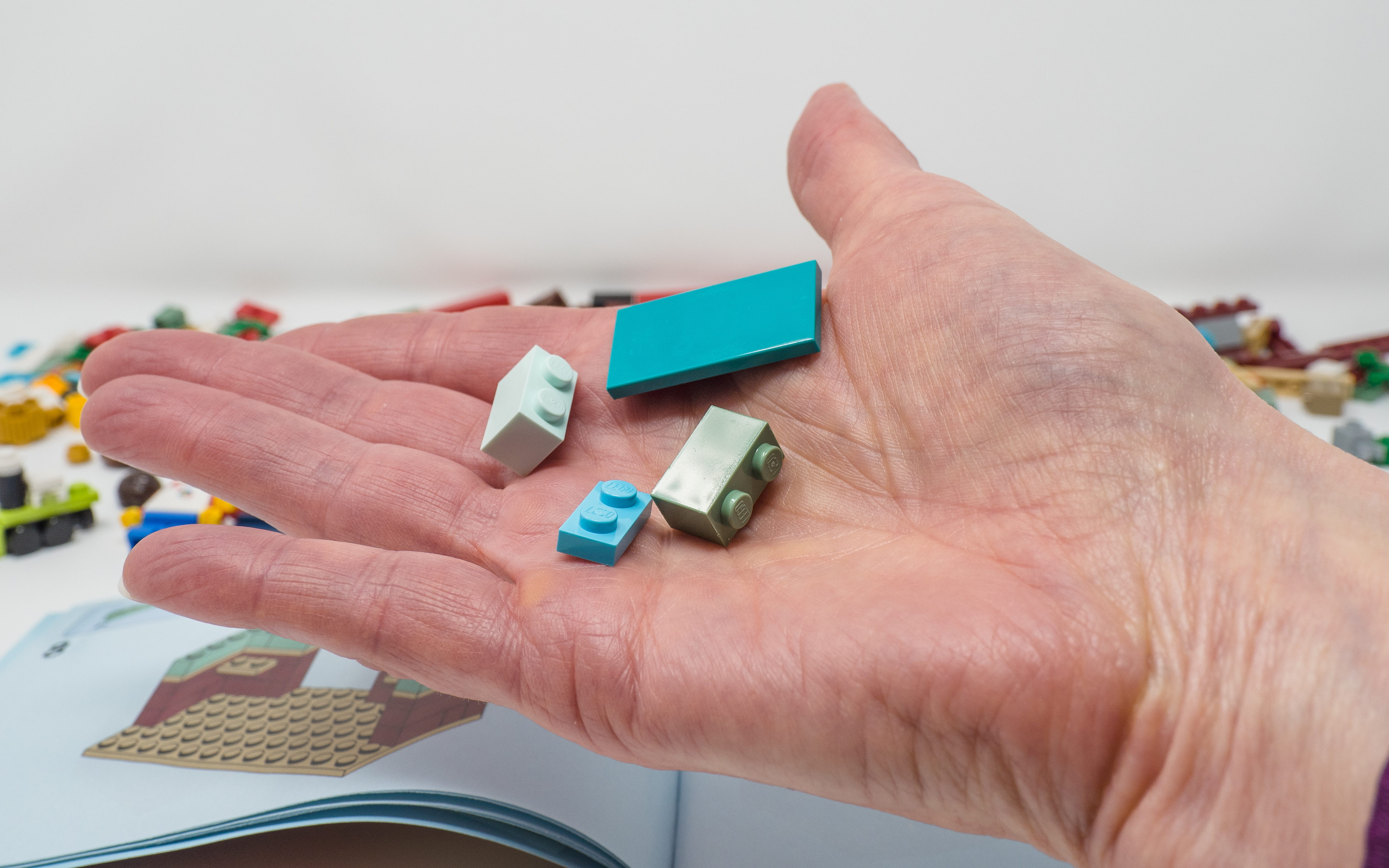 The second half of the gift box is another vignette, this one featuring the family Christmas tree and an easy chair for relaxing near the fire.

At this stage of construction, the set reminded me a lot of the two limited edition, gift with purchase sets offered in 2011: 3300020 Christmas Tree Scene and 3300002 Fireplace Scene.

The two halves are connected as the Christmas tree side of the room is constructed. A hinge mechanism allows the scene to open up when the gift box lid is off. Similar to Lego’s large modular build sets, flat 1/3 height pieces trim the top of the gift box so that the lid can be easily removed once the set is complete.

No gift box wrapping is complete without a top – the final section of this Lego Christmas Gift. In addition to extending the white-edged red “ribbon” that trims each side of the box, the top is decorated with a gold bow and some holly leaves and berries. 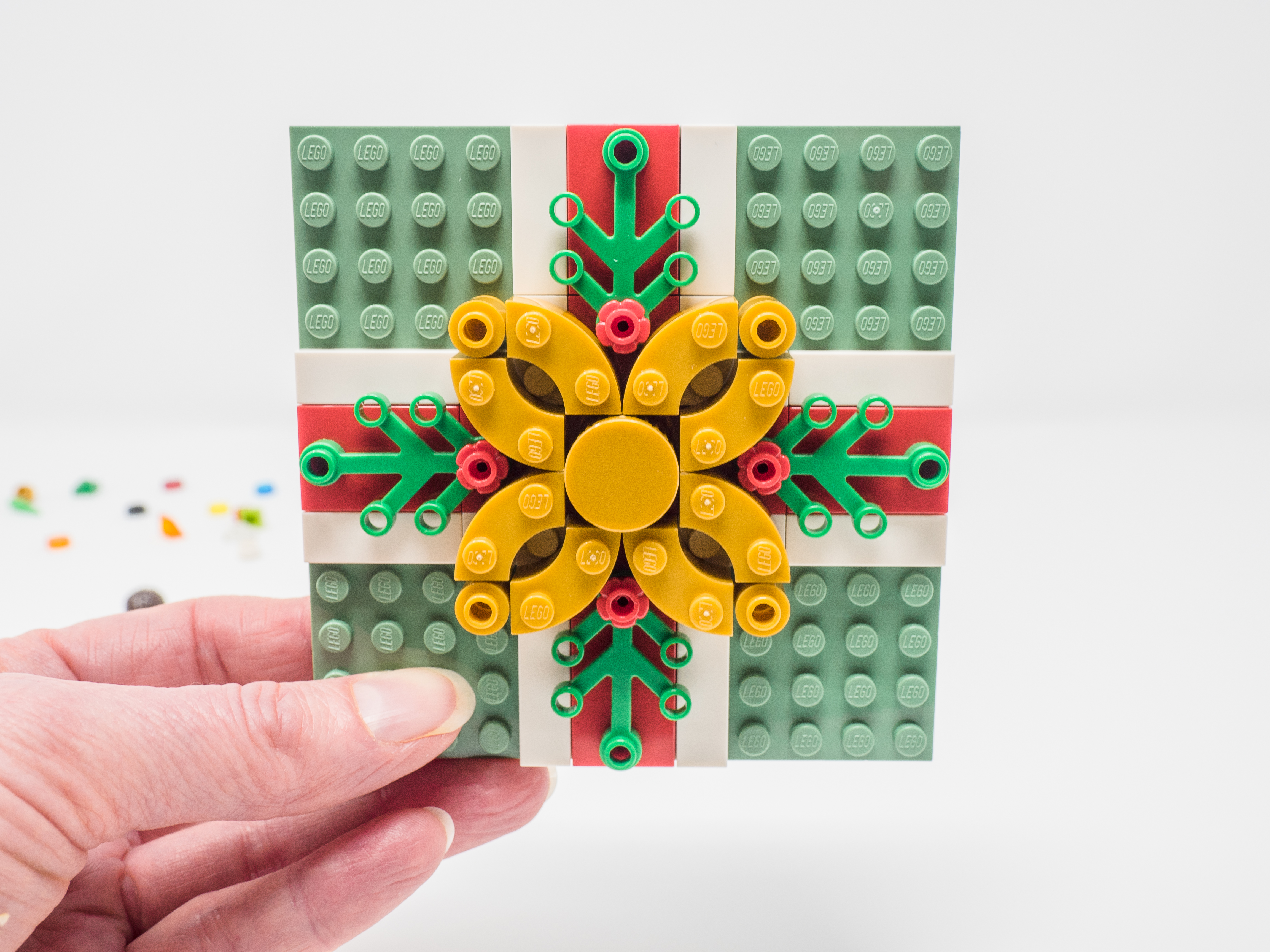 This angle shows how the ribbon wraps around the top edges.

The clever design of the hinge that allows the box to open up is almost – but not quite – invisible. 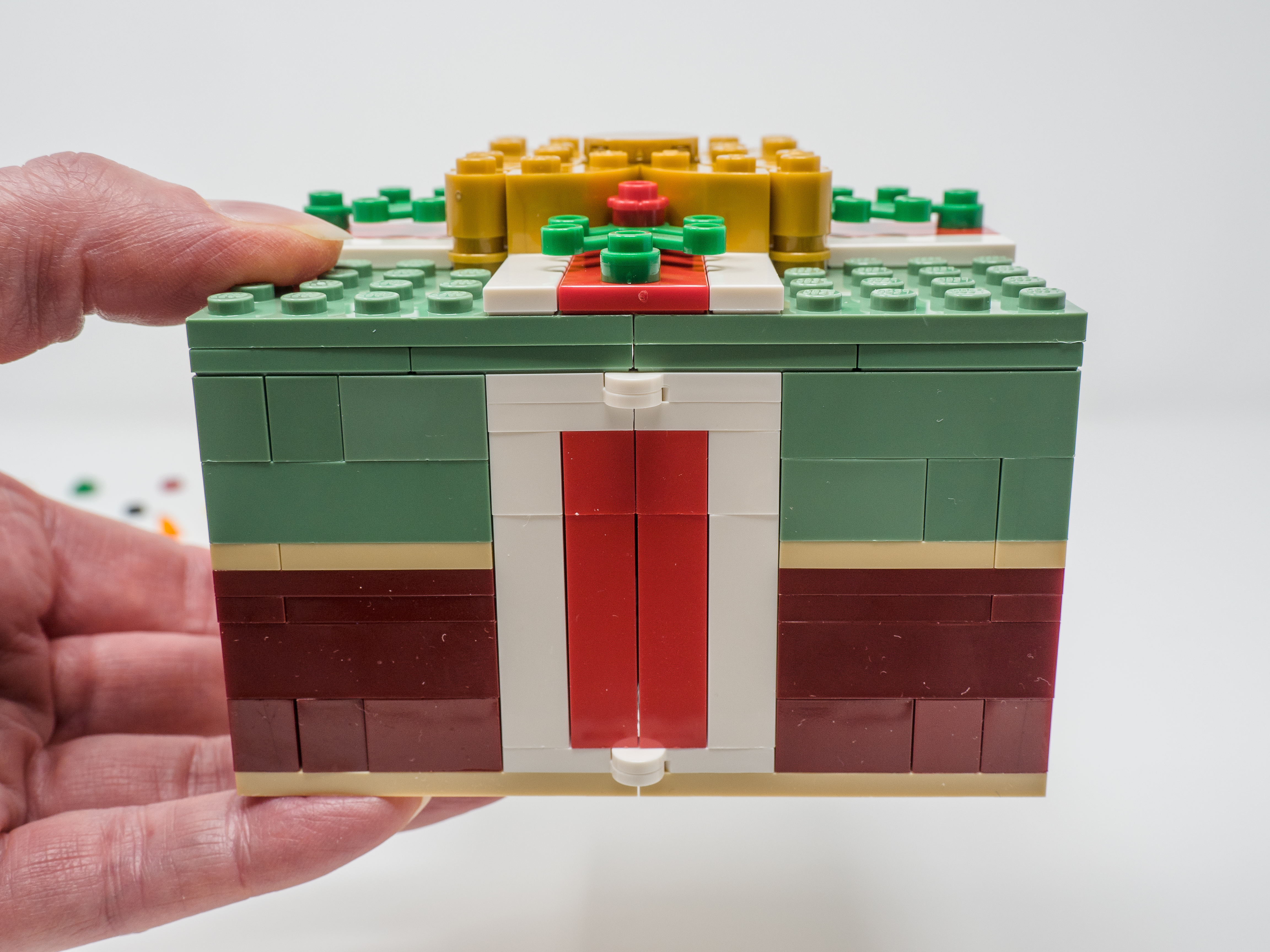 Two things could make the hinges fade away entirely: 1) replace the 1/3 height white bricks just below the top hinge with a combination of single stud, square 1/3 height white and red bricks; and 2) come out with a new hinge piece that’s only one stud wide each side of the hinge. That new piece wouldn’t have the fastening power of the current 2-stud long design, so I don’t see that happening any time soon.

The other aspect of this build that is a bit clunky are those drapes. One the one hand, it’s the first time I’ve seen drapes like this. But they are definitely bulky. Drapes printed on the window panes may be a better choice in other sets. In this case, because of the need to have the windows inside the gift box, the clunky drapes serve to hide the fact that the windows look out onto the inside of a box!

What do you think? Any other changes or improvements you would make to this set?

For the month of December, this Christmas Gift box is on display on our mantelpiece, along with the 2017 Nutcracker, 2015 Gingerbread House, 2016 Snowglobe (set 40223) and the two vignettes from 2011 mentioned earlier in this post. How do you decorate for the holiday season?