Our trip planning identified two night photography opportunities we aimed to cover during our short stay in Halifax. So while enjoying full days of sightseeing in and around Halifax, we were careful keep a little energy in reserve – just enough to head out two evenings in a row, loaded camera bags on our backs.

While it seems there are lots of great night photography targets along the Halifax harbourfront, we opted to use the Halifax Transit Ferry service to travel to the other side of the harbour, where we hoped to photograph the Halifax skyline during sunset and blue hour.

While riding the ferry, we spotted a large container ship departing Halifax Harbour. The fact that it looks pretty much the same size as George’s Island gives a good idea of its massive size.

Based on advice from our walking tour guide and the Halifax harbour visitor information centre, we opted to take the Woodside Ferry early enough to try the fish & chips at John’s Lunch. We probably could have shared a meal here and agree that we preferred the “tips and chips” over the “fish and chips”. After fueling up on not-quite-fast food, we headed north along The Great Trail through Woodside Area Regional Park. The first interesting thing we spotted turned out to be survival systems training equipment. Note the harbour cranes across the harbour, on the left. 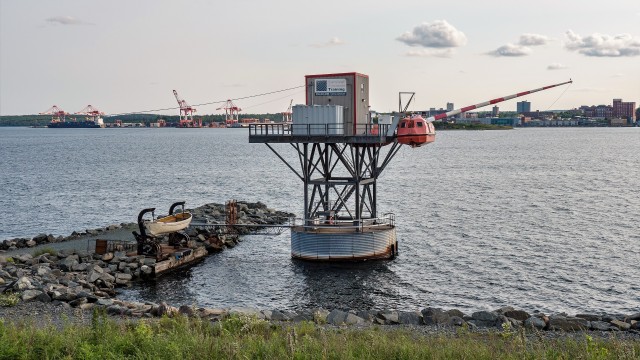 We continued north, past some health care and post-secondary education buildings, scouting for a good spot to photograph the city skyline across the harbour. We ended up at a viewpoint at the end of Boundary Street. From there, we spotted a guy walking his dog in an open area just south of a large, two-story red brick building and that grassy field looked ideal.

Guess we figured right…by the time we followed the narrow band of land between the railway tracks and the fence around the brick building to the open field, a local photographer had arrived and set up his camera and tripod with the same photographic objective in mind.

The weather didn’t really cooperate. Heavy cloud obscured most of the sky during sunset.

The live composite capability of our Olympus cameras did a great job of enhancing the limited sunset colour that briefly showed.

Steady, light rain had us packing up and heading for the Alderney Ferry Terminal with blue hour barely underway. 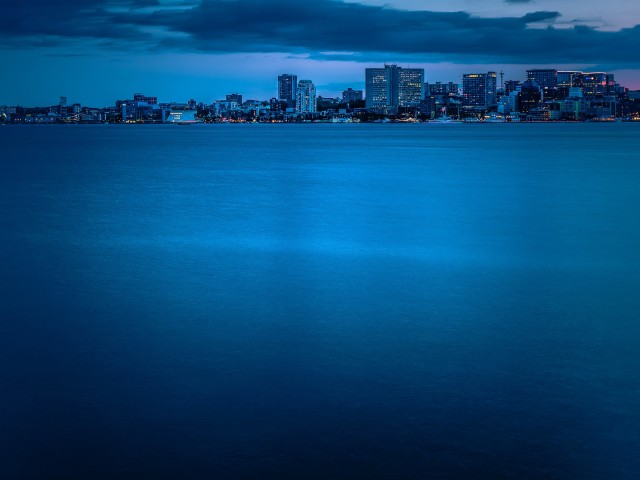 We had just enough time at the northern ferry terminal to get in a few photos of the MacDonald bridge.

And I kept my camera out to get some images as we approached the ferry terminal on the Halifax side.

Despite the weather challenges, it was an overall positive experience, especially the chance to talk with local photographer, Dave, who shared his ideas on places to stop while exploring Lunenburg and Peggy’s Cove the following day.

After a long day-trip that included Lunenburg, Blue Rocks, Oak Island, Peggy’s Cove and Polly Cove, we opted to stop at Kitsune Food Co to fuel up for our second evening of night photography. They do a steady take-out business, but we pulled up a couple of stools at the counter that separates the entrance from the small kitchen and enjoyed watching the talented wife/husband team at work while we ate a very tasty dinner.

Fort Needham Memorial Park is within easy walking distance of the restaurant, and that’s where we headed for our second night photography outing. Shaped like a bombed home, ripped apart in the 1917 Halifax Explosion, the Memorial Bell Tower was refreshed in 2017 for the 100th anniversary of the largest explosion prior to the atomic bomb. We’re not clear on whether the LED lighting that comes on dusk was part of the 2017 rejuvenation, but it adds evening drama to this important landmark.

We arrived shortly before sunset, which allowed time to read all the information plaques in the park and to view the memorial in natural light. Despite being a few kilometers (2 miles) north of where we were staying (near the Halifax Citadel), it was well worth the effort to get to the Halifax Explosion Memorial Bell Tower. While signage in the park provides the bare facts about the deadly event, there are also several books available from our local library and I’ve got one on my e-reader that I look forward to starting soon.

Do you make a point of getting out to take some night photographs when you’re on vacation? If so, how do you figure out where to go? And what other steps do you take to maximize the likelihood of coming away with some great images?