After riding up Highwood Pass we opted for something considerably easier for our next ride: 34 km (mostly) along the Bow River Pathway in Calgary. We didn’t have any particular stops / destination in mind and somehow the ride just naturally evolved into an art and architecture tour…

Riding from Edworthy Park towards downtown, our first stop was at a new-to-us public art installation – Outflow at Parkdale Plaza. Temporary signage on site explains how the artist, Brian Tolle, incorporated a replica of Mount PeeChee (near Canmore) and Calgary’s stormwater run-off system into the project. The lighting and landscaping looked pretty interesting to me, and a quick check of of the artist’s concept of Outflow at night has me planning a return visit one evening this fall, perhaps in conjunction with another stop at Poppy Plaza. 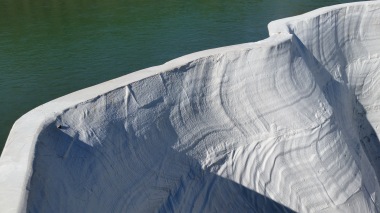 Our next stop was at an unofficial public art installation, one of several created by Calgarian Luke Materi. Reachwater Keep is constructed of natural materials collected from the immediately surrounding area – primarily deadfall/driftwood and smooth rocks. Materi uses rock balancing and dry fit techniques, and for Reachwater Keep he dug the foundation stones in with the hope Reachwater Keep will survive at least partial submersion when the Bow River level rises. Somehow I managed to miss all the media coverage of Materi’s work, mainly covering his largest project, Winterfell, in Bragg Creek. I’ve since learned that his work has come to the attention of CBC, the Cochrane Eagle and Calgary’s avenue magazine. We did spot Materi’s ongoing project on the small island just downstream of Edworthy Park, but completely missed the companion piece to Reachwater Keep, installed under the Crowchild crossing on the south shore of the Bow River. 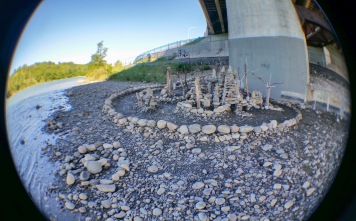 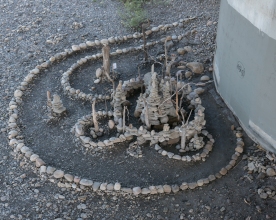 We didn’t stop at Poppy Plaza, but it would have been the next logical stopping point had we planned a public art cycle tour along the Bow River Pathway. And while we stopped long enough to photograph the iconic Peace Bridge, we didn’t cross over to Prince’s Island to tour the sculpture garden. Instead, we continued pedaling east along the pathway pausing to watch a small city crew struggle to get an underpowered, remote-controlled boat to travel upstream and then again at the pedestrian overpass to the Calgary Curling Club where the support structure has become the canvas for some colourful murals by Calgarian Wil Yee…Illustrator of Sorts.

Our longest stop was at St. Patrick’s Island where we found a geocache, had some creative fun photographing the St. Patrick’s Bridge (aka Skipping Stone Bridge), explore The Tip of the island and admired the Bloom sculpture and the large birds’ nest atop one of the “petals”. 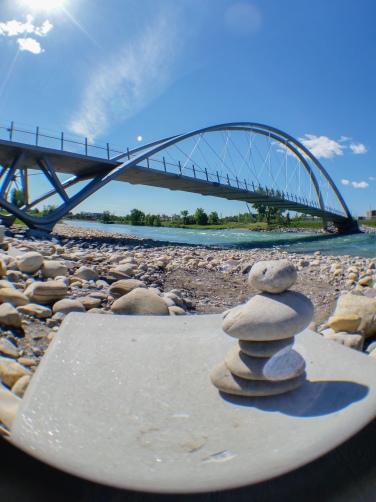 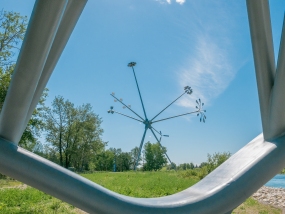 After a quick stop in East Village to check out some of the amazing food options in the Simmons Building it was time for the most intensive exercise part of our ride, pedaling west along the south bank of the Bow River all the way back to our west Calgary home. Potential art stops that we rode right on by include the sculptures at Nat Christie Park between 10th Street and 14th Street and Luke Materi’s rock sculpture under the Crowchild Bridge.

SUMMARY:
Total distance = 34 km
Total time = just over 3 hours, including 1 hour for photo stops
Total elevation gain = 259 meters, pretty much all of it due to the climb from Edworthy Park to our west Calgary home up on the hill