Is the price of admission worth it? Yes! A secluded alpine valley ,dotted with beautiful turquoise lakes connected by creeks, waterfalls and more than 80 km of trails, the Lake O’Hara region of Yoho National Park is a hiker’s paradise.

Work on the trail system began in the early 1940s. Thanks to the hard work started by George Link, Adeline Link and Lawrence Grassi, and carried on to this day by volunteers from the Lake O’Hara Trails Club, trail markers, rock steps and stone bridges make for fairly straightforward hiking – so you can devote most of your attention to the magnificent landscape!

The Lake O’Hara parking lot is about 2 km west of the Alberta/BC border along the TransCanada Highway, just west of one of the many wildlife crossings that have been installed in the Canadian Rocky Mountain Parks over the past 20+ years.

Unlike most hike areas in Banff, Yoho, Kootenay and Jasper national parks, the connection between the parking lot and the lake is not a hiking trail – it’s a gravel fire service road. You may, of course, walk the road, gaining about 400 meters over 11 km through the forest. If you leave early enough, you’ll minimize your exposure to dust kicked up by the Parks Canada and Lake O’Hara Lodge shuttle buses (first departure 8:30 am). Strong hikers should arrive at the Lake O’Hara Le Relais Day Shelter in about 2 hours. Bicycles are not permitted on this road. In the winter (and assuming adequate snow cover), cross-country skis or snowshoes will get you there.

This post from our 2014 visit to Lake O’Hara includes a full rundown of options to avoid the long, dusty walk along the road.

While waiting for the lodge shuttle bus, we talked with a Parks Canada warden who confirmed that shuttle bus reservations are occasionally cancelled, so it’s worth regularly calling or checking the website for availability. Another option is to show up early (at least half an hour before scheduled departure times) in case of no shows. Those seats are filled on a “first come” basis. During our four days of hiking at Lake O’Hara in early July, we spoke to two couples who got standby seats (a rain/snow weather forecast probably helped them).

Within seconds of boarding the Lake O’Hara Lodge shuttle bus and before we left the bus stop, we spotted a black bear through the windows. The Parks Canada warden immediately called in the sighting. The bear took no interest in the bus or the people, crossing the road and continuing up into the trees.

The shuttle bus covered the 11 km in about half an hour. Thanks to washboarding and potholes, it’s not a smooth ride.

We reached Lake O’Hara Lodge a few minutes before 10:30. Thanks to previous visits, we knew to have our day packs ready to go, so we could hit the trails without having to dig stuff out of our luggage in the storage shed (rooms are not ready until the afternoon). We grabbed the trail lunches that were waiting for us and headed out. Between the late start, light rain and our desire to get a sense for trail conditions on something not too challenging, we opted to head towards Lake McArthur, with the option to extend to Odaray Grandview Prospect – a hike we last did on our first trip to Lake O’Hara in 2008.

Once at Lake O’Hara, Le Relais Day Shelter is a good spot to borrow trekking poles, take shelter from the sun or rain, grab a coffee, snack or trail map, or wait for the afternoon shuttle bus back to the parking lot. It’s operated by the Lake O’Hara Trails Club.

There is a trail map sign on the lake shore trail across the street from Le Relais. Information signs are posted at many trail junctions in the area. We always try to carry local map (in this case Gem Trek’s Lake O’Hara Trail Map and Guide in One) plus a GPS loaded with a topo/trail map for the area. With all those navigation aids, it was pretty easy to figure out we should start along the Alpine Meadow trail.

It took us a while to move past Elizabeth Parker Hut, as we both had to stop and sort out our camera gear (which had been packed for the drive/bus ride). Once we got our gear squared away, we didn’t stop again until we reached Schaffer Lake.

The trail to this point was a bit sticky from the light rain, but otherwise clear. From the lingering snow visible across the lake, we realized we’d be crossing patches of snow throughout our stay – not really a surprise at the beginning of July.

The first patch of snow we encountered was watermelon snow! We’ve only ever noticed a pink tint to the snow in the summer, when the conditions support a bloom of chlamydomonas nivalis, a species of green algae with a secondary red carotenoid pigment in addition to chlorophyll.

By the time we ascended that first snow patch, we were well on our way to the High Level Circuit to Lake McArthur.

About 700 meters from the Schaffer Lake we came across what turned out to be the least helpful sign we encountered over our four days of hiking. It was informative enough the first time we came upon it, and we followed the arrow south along the conjoined Low Level and High Level trail towards Lake McArthur. Another 150 meters along at the Y intersection, we opted to follow the High Level Circuit.

Like all trails in the Lake O’Hara region, the High Level Circuit is very well established. 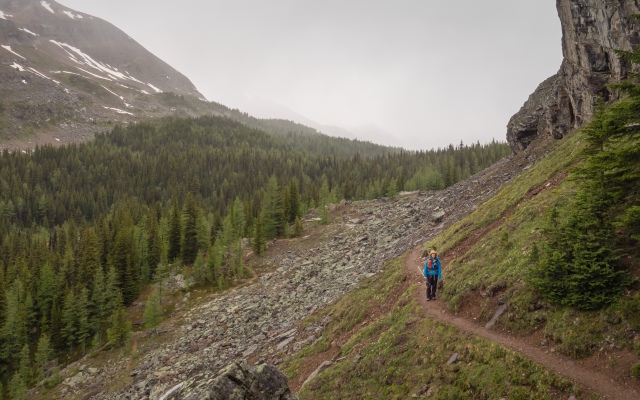 We had chatted with another couple at the last sign, and they’d opted for the Low Level Circuit. Several times we spotted his red jacket below us.

There is one small step-up along the way and this series of 3 images shows Mrs. GeoK’s approach, Mrs. GeoK past the step-up and Mr. GeoK approaching from below. We were glad we opted to approach Lake McArthur via the High Level Circuit and leave via the Low Level Circuit – taking the possible loop in that direction meant we wouldn’t have to contend with descending this particular spot.

As we approached Lake McArthur, the rain changed, first to ice pellets and then to wet snow. Happy Canada Day!

We found a relatively dry patch under a couple of evergreen trees and settled in for lunch, hoping the snow would clear off so we’d have better conditions for photography. After 45 minutes, it was still snowing, so we gave up our dry spot (quickly claimed by two other hikers) and took some photos anyhow!

Situated in a hanging valley surrounded on three sides by Schaffer Ridge, Mount Biddle and Park Mountain, Lake McArthur is the largest lake in the area, roughly twice the size of Lake O’Hara.

Leaving Lake McArthur via the Low Level Circuit, we encountered another lingering patch of snow. Mrs. GeoK grabbed a handful or two to clean the worst of the mud off her rain pants.

Although our cameras are weather-sealed, by this time we’d either packed them away or covered them with Sea-to-Summit bags to keep off most of the moisture.

Then things got a little muddled and we ended up going back and forth along the same stretch of trail while we tried to figure out which route was the cut-off to McArthur Pass and Odaray Highline. In the end, we had to pull out our GPS unit to figure it out.

Restrictions are in place to limit use of the Odaray Highline and Odaray Grandview Prospect trail. The restrictions limit disturbance to the wildlife that uses the McArthur Pass area as a movement corridor. Parks Canada restricts the number of hiking parties that travel past the sign-in kiosk and the number varies depending on time of year. In early July, the limit is 4 tightly-spaced groups per day. Two groups had signed the registration page for July 1, so we added our names below theirs before continuing.

The precipitation changed back to rain by this time, with low cloud rolling through.

About 10 minutes along, we noticed a good spot to take a couple-selfie, with Lake O’Hara in the background. This is one of the reasons we carry at least one tripod between us!

Most of the Odaray Highline is relatively flat.

When you reach the “Area Closed” signs and turn onto Odaray Grandview Prospect the elevation gain comes pretty fast (grade > 20%).

After about 20 minutes of heavy breathing, Mrs. GeoK stopped at what looked to be a bit of a crux, while Mr. GeoK continued upwards. The last time we hiked here was in 2008, and ten years on we couldn’t quite remember what the trail was like beyond this point.

For about 30 minutes, Mrs. GeoK watched cloud after cloud roll through the valley.

And she took advantage of a break in the cloud to photograph the hanging valley with Lake McArthur.

Eventually, concern for Mr. GeoK compelled her to continue. She was less than 50 meters beyond the little crux when Mr. GeoK came into sight, on his way back down from where the Odaray Grandview Prospect trail bands out. The bird’s-eye view gives a pretty good sense of how the mountains and lakes are arranged.

And the trail markers painted on some of the rocks clued us in to the fact that Odaray Highline to Odaray Grandview Prospect is considered part of the Lake O’Hara Alpine Circuit – something we’d missed on our 2008 and 2014 trips to this area.

Retracing our route, we encountered a group of three hikers at the start of Odaray Grandview Prospect – the fourth and final group permitted on the trail that day. We got lucky and were able to hike the Odaray trails, even though we didn’t reach the registration kiosk until well after lunch. On better weather days, it would be prudent to hike the Odaray trails before heading to Lake McArthur.

Past the registration kiosk where we signed out, we kept left at the first Y-junction we encountered, returning to Schaffer Lake via the McArthur Pass trail.

On reaching the Lake O’Hara shoreline trail, we paused for more photography, including the obligatory red canoe shot!

And here’s a peek inside our Lake O’Hara Lodge Lakeshore Cabin #1:

Distance = 12.4 km (including about 1 km of wandering back and forth looking for the cut-off to McArthur Pass)
Elevation gain = 683 meters (427 net)
Time = 6 hrs 40 minutes, including 2 hrs 40 minutes for lunch and photography stops