After Zodiac excursions in Placentia Bay and Aviron Bay, we looked forward to going ashore for a short hike in Gros Morne National Park, a UNESCO World Heritage Site.

The RCGS Resolute was at anchor in Bonne Bay when the first morning announcements came over the speakers in our cabin. It was time to get a move on! Following breakfast, passengers disembarked for one of four options: kayaking (an optional, extra-charge activity for the duration of the cruise), a birding-oriented walk, a bus trip to take a short walk on the Tablelands, or hiking the Lookout Trail.

The kayakers were the first to depart, all in one Zodiac with a long string of kayaks in tow. 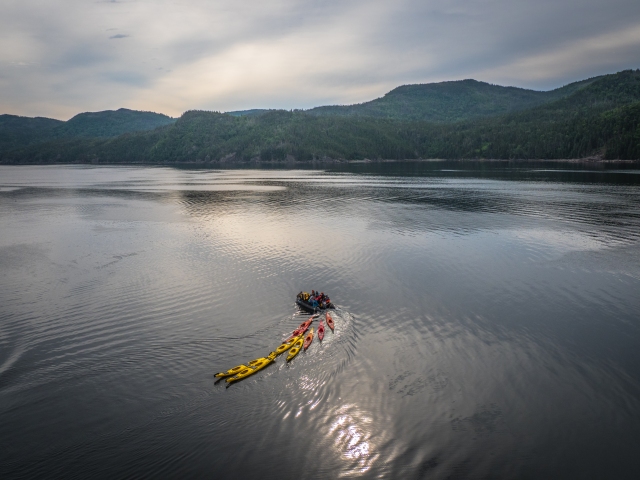 Our new friends, Len and Janet, were part of the kayaking group. 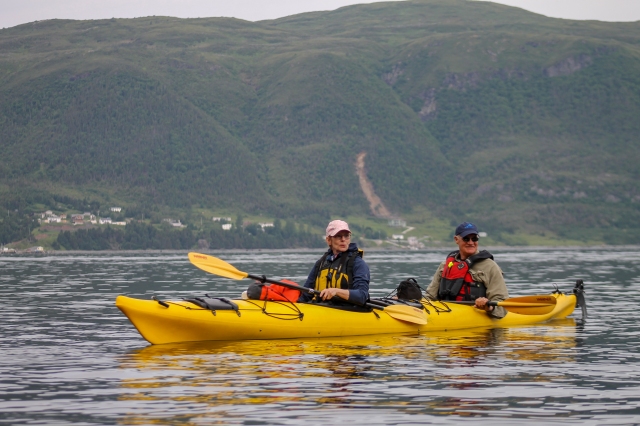 They came back aboard all abuzz about a whale sighting. One of the kayakers took this photo, which shows the dorsal fin and flukes.

We hopped a Zodiac for the short trip to our disembarkation point at a wharf. Our group of about a dozen hikers immediately set out along some of the quiet streets of Woody Point, until we eventually reached Lookout trail.

It was next to impossible to get lost or run into trouble on this well-maintained trail, so our expedition guide let us go at our own pace, with the promise to meet up at the lookout. Mr GeoK adapted his grip on the too-long loaner trekking poles in order to avoid carrying them as useless extra weight.

Having checked my favourite patch of Lady Slipper orchids in Canmore just a week before we flew to Halifax, I knew we were missing the window for Lady Slippers to bloom in the Canadian Rockies. So I was delighted to spot some pink Lady Slipper blossoms beside the trail.

We were impressed with some of the construction techniques on this trail – particularly the upslope trenching and across-trail trenches designed to channel water beside and then across the trail rather than allowing it to run along the trail where it could cause significant trail damage. In the aftermath of the 2013 floods in Alberta that seriously damaged many hiking trails in the Canadian Rockies, we think it’s a technique that Parks Canada should share across the country! 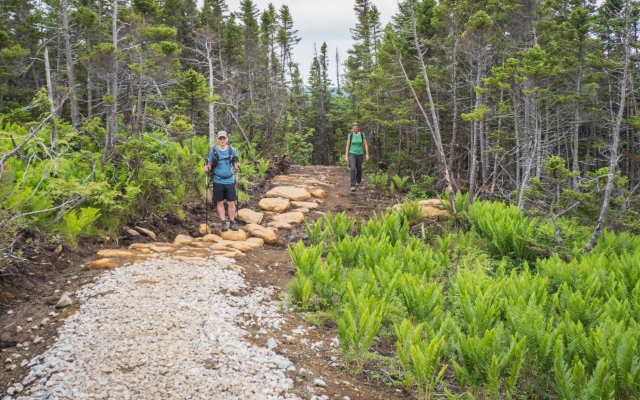 Emerging from the forest, we continued along an extended stretch of boardwalk that gradually stepped up the boggy slope.

We couldn’t believe how many pitcher plants were flowering beside the boardwalk! We first spotted these new-to-us blossoms at Polly Cove, while day-tripping from Halifax. But in that instance we saw just a few isolated flowers. The plethora here was appropriate, give this insect-eating plant is the official flower of Newfoundland and Labrador. I smiled at the irony of insect-caused holes in one pair of insect-eating blooms! 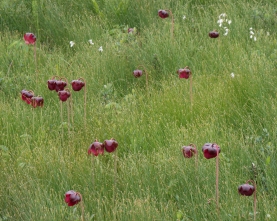 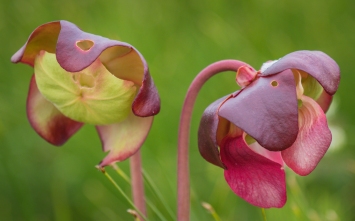 At the top of the boardwalk and before reaching the lookout, I also spotted a delicate bog candle orchid.

At the lookout, we watched a local tour boat motor past the RCGS Resolute. It looked like a toy in comparison to the 146-passenger expedition cruise ship! 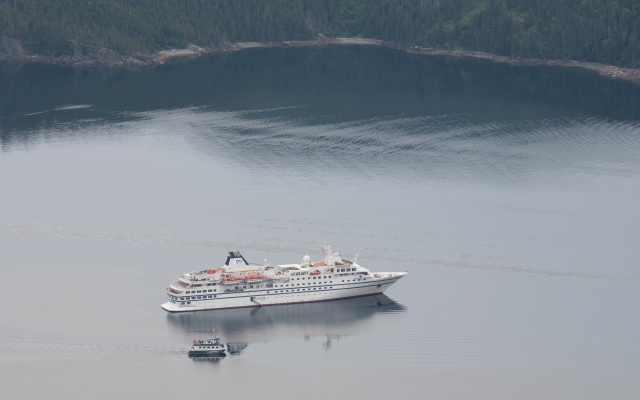 We “posed” for a photo at the lookout, but our new friend/fellow passenger/photographer Dave must have forgotten to say “smile” before pressing the shutter. There’s no other reasonable explanation for Mr GeoK’s grumpy face! 🙂

Mr GeoK spent a bit of time taking multiple frames with the aim of showing the panorama views from the lookout. To the south, the Tablelands, where visitors can take a guided hike on the earth’s mantle (and a good reason for us to make a return visit to Gros Morne National Park).

And below, the RCGS Resolute anchored in the beautiful Bonne Bay, where this perspective shows the fjord nature of the bay’s arms.

From the lookout point at the top of Patridgeberry Hill, we opted to extend the hike via the mostly boardwalk loop. At one point, Mr GeoK went back to the lookout to shoot some more panoramas, so I had time to set up my tripod and try for a forced perspective that I conceived that would have me “touching” the snow remnants on the north side of the Tablelands. As you can see, it didn’t work out. 😦

After making our way back down the trail, we had a bit of time to explore the Discovery Centre before catching a short shuttle bus ride back to catch a Zodiac back to the ship. It’s well worth spending a bit of time in the Discovery Centre, especially in bad weather. There’s plenty of information about the unique geology of Gros Morne, whimsical sculptures, short films and more.

This was an easy hike and a great introduction to Gros Morne National Park.