Our Lego purchases peaked eight or ten years ago, when our kids were old enough to build the complicated sets and young enough that they didn’t have mobile phones/tablets silently luring their attention. Now, Mr GeoK buys just a few sets each year, usually from the architecture, Star Wars, Technics or IDEAs lines. As the year progresses, he makes his list, checks it twice, and then waits until the annual holiday “bonus with mini  mum purchase” sets are available before placing his order. Lucky me that he’s willing to wait, since I usually have the privilege of building the holiday bonus set(s)! 🙂

The first 2019 bonus set is the biggest one yet – both in terms of piece count and height (22 cm or 8.5 inches). IMO, it’s not scaled to Minifigs – the green and turquoise gifts are two bricks tall, as high as a Minifig’s waist!

The box contains two numbered bags of parts and an instruction book.

Bag 1 contains a bunch of loose bricks and plates, as well as two smaller bags full of little parts.

The build begins with the assembly of three wrapped presents in non-traditional colours.

About 30 steps into the build, two toy trains appear under the tree – and they spin! This is the most delightful aspect of the set. These tiny trains remind me of the Lionel Trains so beloved when our kids were maybe 4 to 6 years old: the Daylight Limited and Torpedo Run stories read aloud by Lavar Burton. Those memories brought a smile to my face and prompted me to add the Great Railway Adventures trilogy to my Christmas playlist to enjoy when our now young adults are “home” for the holidays!

With the base complete, I moved on to building the lowest set of Christmas tree branches. This new-to-me circular piece was the center of the sub-assembly.

The completed lower-branch sub-assembly included rounded plates on the bottom which are just cleared by the trains spinning underneath.

The round tree ornaments are a nice detail, but it’s too bad the set designer didn’t figure out a way to make them hang from the branches rather than sit atop them. 😉

At this point in the build, I opened the second bag of bricks and assembled the tree trunk. This was the one instruction in the entire build that I found slightly unclear. My first attempt left too much of the Technic axle sticking out of the top of the trunk, so I had to fuss with the 2×2 round bricks and move them all the way to the top of the rod so that it only stuck out from the bottom end of the trunk.

With the trunk standing tall, it was time to layer on the branches, starting with two more sub-assemblies that were the same size as the lowest branches.

With three sets of large branches stacked in place, the next two sets of branches were slightly smaller. And instead of 4 round ornaments, these sets had two ornaments and two Christmas lights each.

The next set of branches was even smaller, and topped with a circle of one-third height, smooth-topped bricks – to allow the tree top to spin on its tree trunk axle.

An even smaller, closed top set of branches clicked onto the top of the trunk.

Another new-to-me part (1×1 with studs on two adjacent sides) formed the hidden structure supporting the top-most branches of the tree. 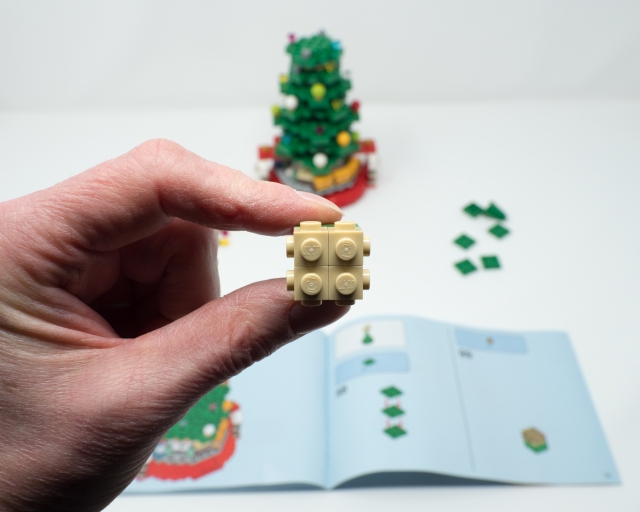 The sand-coloured bricks are hidden inside the tree top with the gold star on top.

The star makes it easy to spin the top of the tree, connected to the trains which go round under the tree. I took about an hour to complete the set, including the time to photograph the build in progress.

The 2019 Christmas tree is a pretty addition to our Christmas decor and it’s on display in our living room, along with the 2018 Christmas Gift Box, 2017 Nutcracker, 2016 Snowglobe, 2015 Gingerbread House, and two vignettes from 2011.

It triggered happy memories of our kids’ train-loving years, which makes it my new favourite, followed closely by the gingerbread house.

I can think of two things that would make this set really amazing: 1) finding a way to make the ornaments hang like they do IRL; and 2) figuring out a way to light the little gem lights. What about you? Any recommendations to make this set even better?

This year’s Christmas Tree is the largest holiday bonus set since we started taking part in 2011. The build uses 392 pieces, about 30% more than the 2018 Christmas gift box bonus set. The substantially higher piece count goes a fair way to explaining why the minimum purchase threshold jumped about 25% this year – a change that prompted a fair bit of grumbling in various forums and comment threads. Lego held the minimum purchase threshold basically constant from 2011 through 2018, while the bonus set piece count increased from 109 pieces to 301 pieces over the same time period. It’ll be interesting to see whether the fan feedback prompts Lego to go with a smaller bonus set/lower minimum purchase threshold in 2020.