Monday morning, with the kids heading off to school, we headed out to the Highwood Pass day use area to hike up to Grizzly Ridge in search of GC1VEY8 – Just East of the Continental Divide, published back on September 5, with the First to Find honours still up for grabs. We were in the parking lot by 9 o’clock and up on the ridge by 10:30. There was a cool wind in play, so we kept moving at a pretty good pace, stopping only a few times to snap photos of the larches (which were past their prime) and some ptarmigans.

Up on the ridge, Mrs. GeoK headed for the cache while Mr. GeoK paused to take more photos. The cache was nicely hidden, but readily spotted, which is just what you want in a mountain cache. But when she opened the logbook, she discovered that someone else found the cache on Sunday and we missed being FTF by one day! Oh well, we were able to rescue a tavel bug that might otherwise have been stranded up there for the winter. And the views down into Paradise Valley were spectacular.

Instead of retracing our steps and heading back to the parking lot via the trail, we decided to walk Grizzly Ridge towards Highwood Ridge and then drop down to the trail from the scree slope you must traverse before reaching Skipping Stone Lake. Unfortunately, we didn’t go far enough to drop down at the least challenging spot (which we’d scouted during our hike up), so we ended up with an extremely challenging descent: friable rock, loose rock, crumbling coal and a crux or two for good measure. The slope was so steep that we didn’t really have the option of popping back up to the ridge; it was head down or stay put, so we had no option but to head down. We fell multiple times, as the loose, sliding rock knocked our feet out from under us and we both ended up with ripped pants by the time we made it back to the trail. In hindsight, it was a really silly decision and, as Mrs. GeoK said "never again" will we be heading so far off trail in an attempt to find a short cut!

We were able to stop in and check in on four of our caches while we were up on the ridge and, in the end, we made it safely back to the parking area about 1:30 pm. This was likely our last hike in the Highwood Pass area in 2009. Next year, we’ll have to head out mid-September in order to catch the golden larches in their prime.

Looking up the valley from the scree field

One of four ptarmigans spotted along the trail

Mr. GeoK works his way up towards Grizzly Col 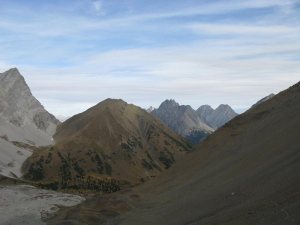 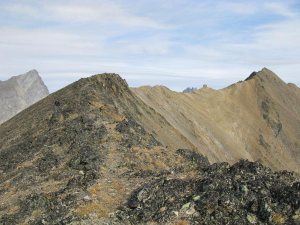