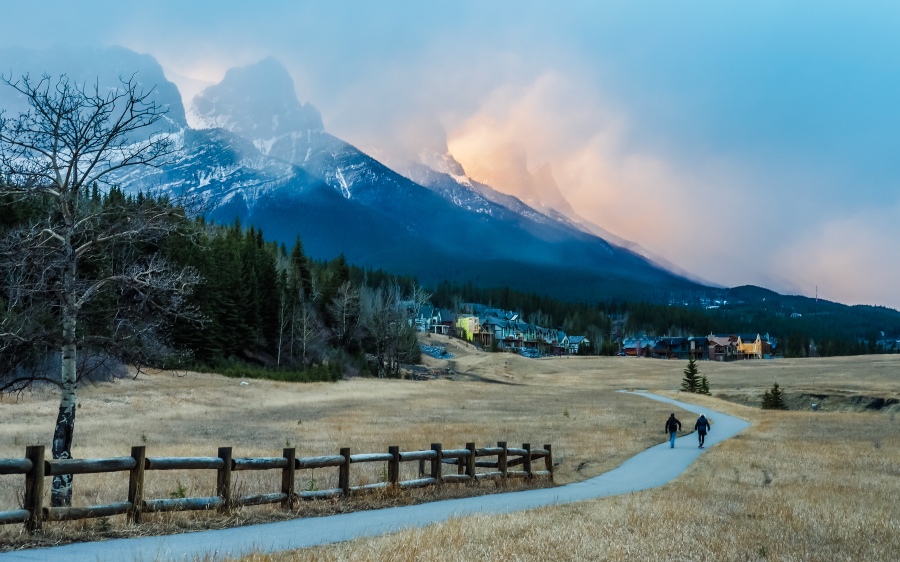 As winter slowly transitioned to spring, we enjoyed two relaxing weeks in Canmore: daily walks, lots of photography and plenty of time for cooking and reading meant we came back to Calgary well-rested and ready for the push to the end of the school year. In addition to a short hike in Banff and our first bike ride of 2015, highlights included:

Our birdwatching is opportunistic. I think we’ve gone out specifically for birdwatching exactly two times: a year or two ago to search for an owl in Griffith Woods and more recently to search for a pair of owls in Carburn Park. Mostly we just stay alert for birds and other wildlife when we’re already out and about. But since Mr. GeoK has added a telephoto lens to his gear bag, we’re inclined to pause a little longer when we spot a bird that isn’t a raven or a magpie. As a result, we spotted an identified a pair of Common Mergansers on the Bow River, a male Mountain Bluebird, a Northern Flicker, a pair of Barrow’s Goldeneyes, a lone Oregon-coloured Dark-Eyed Junco and lots of American robins, mostly male. The behaviour of the robins was interesting in that they were in a flock. We are more accustomed to seeing individual males or nesting pairs, which prompted me to learn that robins more typically flock in the winter, the better to spot food sources. We managed to photograph them all: some just well enough to confirm our in-the-field-tentative-identification and others well enough to share here. 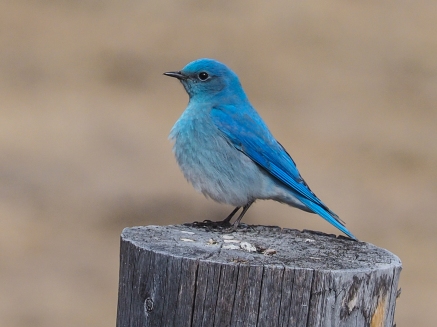 Mr. GeoK’s new telephoto lens was put to good use when we spotted a lone male Mountain Bluebird. 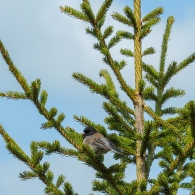 A lone dark eyed junco that I later spotted bathing along the shore of a pond.

One of many male American robins foraging on the ground, this one seems to be keeping a close eye on Mr. GeoK (photographer). 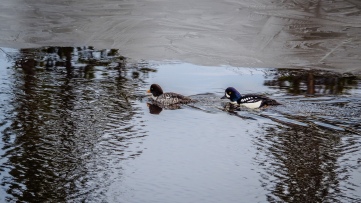 The female of this pair was more active than the male. She was more interested in feeding and led the way as the pair paddled up and down the open stretch of water in a pond. 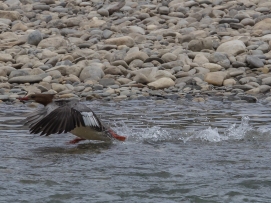 Mr. GeoK managed to get his long lens mounted just in time to photograph this female common Merganser taking off from the Bow River.

The majestic mountains draw people west from Calgary to Canmore and Banff, whether for skiing, rock climbing, hiking, mountain biking or just taking in the scenery. The towering peaks also remind me of my insignificant role in the grand scheme of things. I try to observe how different seasons, the nature of the light and weather systems change the appearance of now familiar mountains (such as Grotto, Lady MacDonald and Rundle) to preserve that sense of perspective (which helps keep my overall stress level down).

A snow squall blew in from the west shortly after the sun dropped behind the mountains. The muted sunset infused a warm glow into the otherwise threatening storm front.

Mr. GeoK got low and used a natural dip in the meadow to screen out the houses between him and the mountain peaks. Ha Ling is on the left and Mount Rundle to the right, with a snow squall blowing in right at sunset. 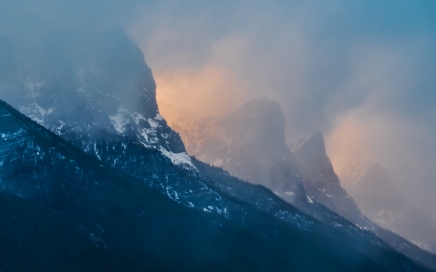 From Canmore, the east end of Mount Rundle seems huge, which makes the the string of peaks stretching west towards Banff seem less intimidating. But when viewed through a telephoto lens through a veil of blowing snow, there’s nothing easy about any of them! 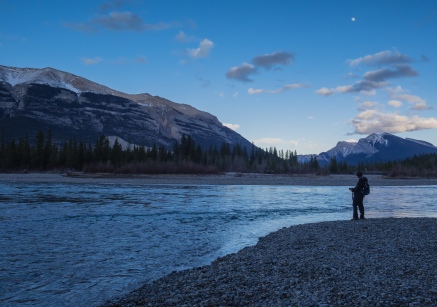 Out for an after supper walk when the moon was already high in the sky, we paused for some photographs along the Bow River.

Reflections, ice, water, clouds, mountains…lots of interesting elements in this photo taken from the south bank of the Bow River near the Bow Valley Campground. 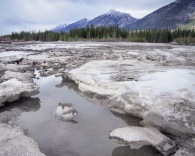 The last remnants of river ice rest on gravel bars just east of Canmore. Mount Lady MacDonald is off to the right. 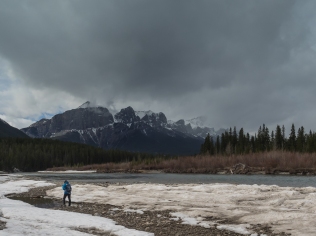 Mrs. GeoK checking out reflections in a pool of meltwater adjacent to the Bow River while a storm blows in over Mount Rundle. 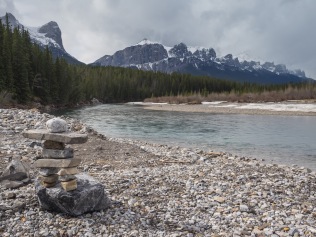 A lone Inuksuk enjoys the view of Ha Ling and Mount Rundle across the Bow River. 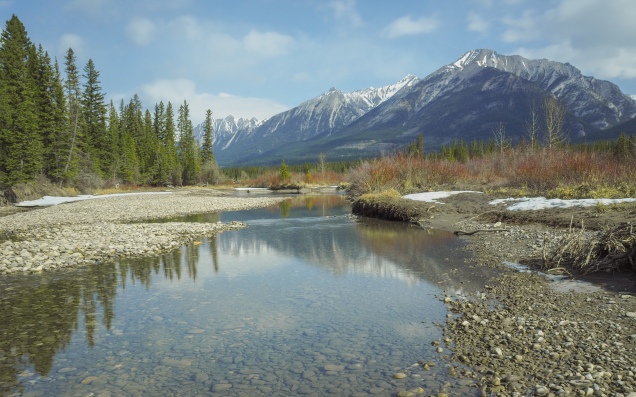 The stillness of an early spring morning, exaggerated by a long exposures (ND filter) to smooth out the water flowing in a side channel of the Bow River. Lady MacDonald looms across the valley.

Changing of the Seasons

It’s a joy to witness the tug-of-war between winter and spring, because I know that spring will eventually win! When overnight temperatures dropped below freezing, a wide range of ice patterns awaited discovery before the noon sun weighed in on the side of spring. More shaded spots suggested we’d see at least one more fresh blanket of snow in the Bow Valley before putting away the skis and ice cleats until next winter (and we did!). And a few branches of pussy willows implied it’ll soon be time to scout for Calypso orchids and Lady slippers. 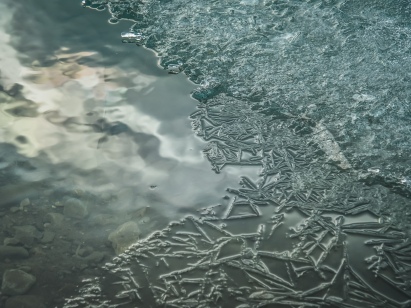 So typical of this time of year, a mash up of open water, a remnant of the sheet ice from the winter and a thin layer of ice crystals that formed overnight.

The early stages of this year’s melt are bringing lots of glacial silt to the small lakes and ponds in and around Canmore, which means they’re beautifully turquoise on sunny days. This close up is a of a small area of open water on a golf course water hazard one sunny afternoon. Sparkling reflections highlighted the strong ripple pattern. 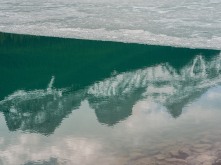 A floating remnant of winter sheet ice anchors a reflection of the Three Sisters tinted turquoise by suspended rock flour. 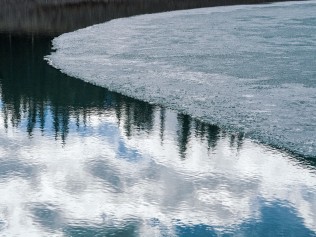 A floating remnant of winter sheet ice intrudes on the reflection of blue sky, white clouds and evergreen forest. 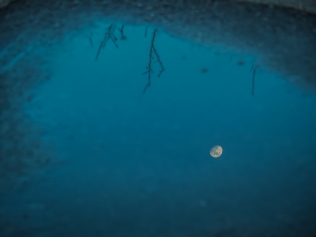 An early evening walk at the end of a long day of rain showers meant lots of puddle jumping and a few interesting reflections. 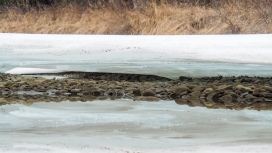 A sheet of ice formed over a side channel of the Bow River late in 2014. The water level in the channel has since dropped, leaving the ice hanging over the gravel bar and skiff of ice resting atop the channel after a particularly chilly night. 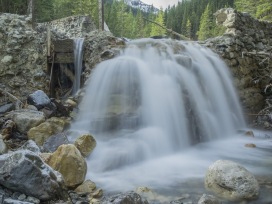 Mr. GeoK set up directly downstream of the break in the old dam on Three Sisters Creek. To the left of the main waterfall, some of the wooden unstructure is exposed. 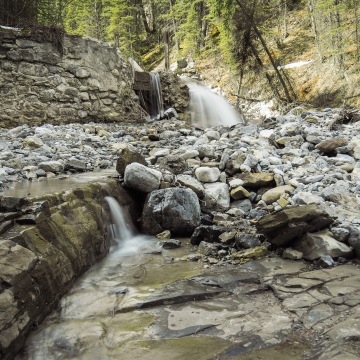 A small breach in the old dam on Three Sisters Creek appeared after the spring melt in 2012. The June 2013 flood event made the break much worse. One side benefit is that it’s now possible to see the construction methods used when the dam was built in the early 1900s. 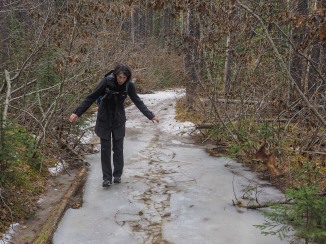 Freezing overnight temperatures put a decent sheet of ice on this stretch of water on the Highline Trail, but at least one canine critter and Mr. GeoK walked through here first, so Mrs. GeoK moved faster with every crack! 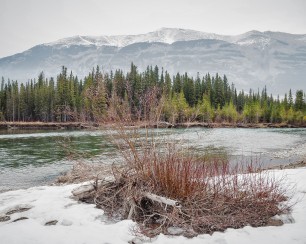 Did you have the opportunity to enjoy nearby nature over spring break? What kinds of things did you find interesting?